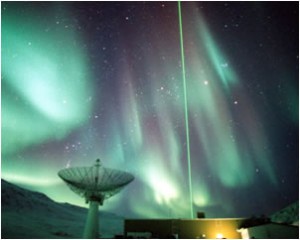 LIght Detection And Ranging is an active remote sensing technique that is used in a wide variety of environmental monitoring missions.  It uses lasers to remotely probe regions of interest and determine different qualities about that area, such as how far away it is, the temperature and the wind speed. Lidars may be ground-based or satellite-based. Katelynn has designed, operated and troubled-shot several lidar systems.  Her Greenland field research involved a high-powered Rayleigh (532 nm) system that could return information from over 80 km (50 miles) high in the atmosphere.  She has also worked on 3D wind vector lidar using a random modulation continuous wave technique.

As a graduate student, Katelynn was part of the ASENL research group directed by Professor Jeffrey Thayer at the University of Colorado at Boulder. ARSENL’s research program is rooted in studying the aerospace environment of Earth’s atmosphere and geospace, specifically geophysical fluid dynamics, gas and plasma interactions, thermodynamics, and electrodynamics applied to the upper atmosphere (above 10 km altitude) and geospace.

In this technique, the Earth is viewed from a space-based platform and the light emitted in the upper atmosphere in the Far-UV is captured by a special kind of camera.  The lower atmosphere is opaque to Far-UV wavelengths, so there is no contamination from below.  The Far-UV light captured tells us about the neutral air species present at 160 km, the temperature of the exosphere, and the plasma content of the equatorial ionosphere.  There are several instruments that are capable of doing this and Dr. Greer works on the GOLD (Global-scale Observations of Limb and Disk) mission.  This is a NASA mission of opportunity and what makes it special is its vantage point: geostationary orbit.  This is the first time scientists, like Dr. Greer, have been able to separate time and space variability of the weather of the thermosphere and ionosphere.  It is hoped that the data from this mission will allow scientists to begin to forecast the weather and state of the thermosphere and ionosphere, mitigating adverse affects. 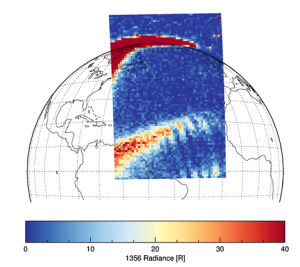 The Equatorial Ionospheric Anomaly (EIA) is a ridge of plasma near the geomagnetic equator.  Observations from the GOLD mission.