This picture of Earth and the ionosphere, taken with a handheld camera by an astronaut on the International Space Station, shows a bright red wall of plasma near the equator. The glowing red in the image is ionospheric plasma, not the aurora.

The lid on the middle atmosphere is the homopause, where the different components of the air begin to separate by molecular weight.  This region is known as the Thermosphere and it has temperatures that can exceed 1200K.  Embedded within this neutral air of the thermosphere is the Ionosphere.  The ionosphere is a region of charged plasma and is composed of several layers.  Most of the plasma is generated by Extreme Ultra-violet light from the sun interacting with molecular and atomic oxygen and molecular nitrogen in the thermosphere. 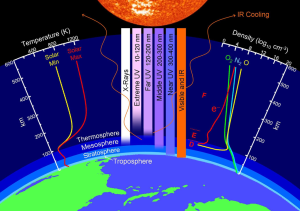 Geomagnetic storms can be thought of as outbursts from the Sun that impact the Earth system.  They can have significant impacts through coupling with atmospheric regions and latitudes, communication and navigation systems, satellite hardware and power distribution systems. These storms are caused by a solar wind shock wave with plasma that interacts with Earth’s magnetosphere, transferring energy into the Earth system. There are many variables that determine the magnitude and structure of the ionospheric response to a geomagnetic storm. 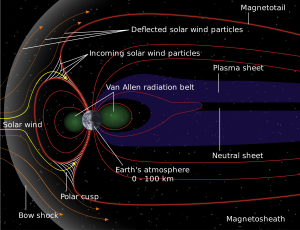 Studies by Goncharenko & Zhang [2008] and Chau et al. [2009] indicate that there observable impacts in the ionosphere during Sudden Stratospheric Warmings (SSWs), suggesting a coupling between the neutral polar winter middle atmosphere and the ionosphere due to changes in planetary waves. Dr. Greer is working on addressing what kinds of ionospheric anomalies are associated with disturbances of the polar winter middle atmosphere, including major/minor SSWs.  Are there particular planetary waves and planetary wave breaking regimes associated with ionospheric disturbances?  What is the timing and location of ionospheric disturbances in relationship to the neutral middle atmosphere disturbances? For these studies a mixture of observations and models are being used.  For the neutral middle atmosphere and lower mesosphere, observations from the MLS and TIMED/SABER satellite measurements have been used in conjunction with assimilated data from MERRA and modeling from SD-WACCM. The E- and F-region ionosphere measurements require incoherent scatter radar data.  And finally, solar and geomagnetic parameters will be quantified using several indices: F10.7, Kp and AE.